Last week I went to the Pyrenees with Karl. The only goal we had for this trip was to make some pictures of bats leaving their roost.

Equipped with a ton of flashes and accessories we left with good hopes to the south of France where our host Alain Bertrand lives. Upon arrival, we discovered that Alain did not only gave housing to us, but also 2 bat colonies. There where over 50 Lesser horseshoe bats occupying his attic, and underneath the slate tiles, there was a small colony of Kuhl’s pipistrelle. 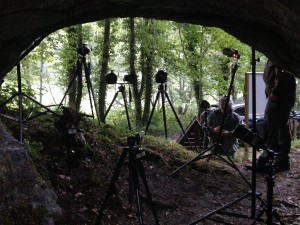 The afternoon was used to build the setup for the evening, which took always more time than expected…